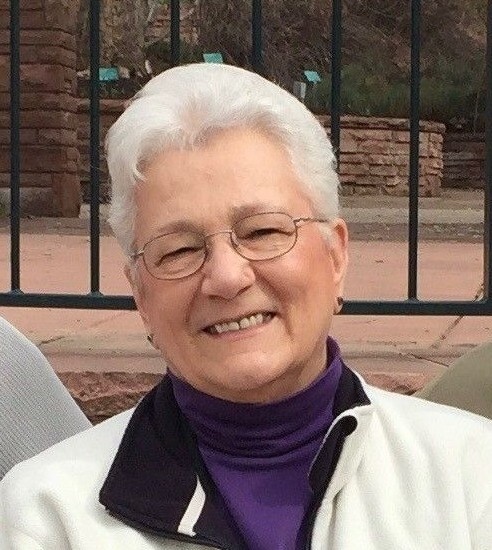 Elizabeth Jean Gosse (Betsy or Betz), age 77, of Salt Lake City, passed away Sunday, September 4, 2022. Born, March 10, 1945, in Milwaukee, WI, and raised in Oconomowoc, WI, prior to meeting Alex (“AJ”) Gosse whom she married on August 15, 1964. Theirs was a Hollywood scripted romance. Tall, handsome AJ laid eyes on Betsy and from that first day he made it a point to meet her every morning at the bus stop. They rode together to her stop at the Business School. Some say AJ’s daily punctuality was driven by love; others claim, “he was the bus driver.”  I choose to believe love.

The couple moved a bit in the early years from West Bend, WI to Alameda, CA; east to Reno, NV; back to Oconomowoc; next was Cheyenne, WY; before settling in Salt Lake City. And Betsy adamantly claimed to not like traveling.

Arriving in Salt Lake City, Betsy had her own “this is the place” proclamation to AJ, settling and raising their family in the Salt Lake Valley. Betsy enjoyed movies, music, board games, and needlework. While not known to enjoy crowds, she mixed with concert goers to see DePeche Mode, Kenny G, Stevie Wonder, Howard Jones, Ah-Ha & Neil Diamond performances. With her sewing skills she created many wardrobes for the kids as they grew up. Betsy liked Trish to be in skirts/dresses when she was young, so she only made her skirts until it got cold, therefore ensuring that she didn’t wear pants. She found the only known bolt of “blue fuzzy indestructible polyester” fabric which she fashioned into matching shirts for the three boys. Even as adults, the boys vividly recall those still-living shirts. Board and card games were staples in family entertainment and Betsy mastered all. Mille Bornes, a card game of cross-country racing, she frequently drew the “tire puncture” cards to slow one’s progress. Scrabble…she knew every high-point 3-letter word to foil her opponents and the board’s opportunities. And for Wahoo, a marble game, she built wooden boards to her own specifications. The kids learned early…you do not win every time.

With her children grown, Betsy became a teacher’s assistant at Libbie Edward and William Penn elementary schools for 13 years, where she introduced and taught many children the game of Wahoo, by now mysteriously renamed “The Marble Game”, and life’s lesson that not everyone can win, and if you are a sore loser, no one wants to play with you.  Betsy’s love for needlework led her to work part-time at Craftcenter of Fine Stitchery, where she made life-long friends, assisted customers and crafted many beautiful needlepoint and cross stitch creations. If you were lucky enough, Betsy would crochet an afghan throw for you, which now reminds and blankets those recipients with her love.

Betsy was self-confident, a good listener, enjoyed laughing, her family, and could keep a secret. She was a devoted wife, loving mother, the best sister and a much-loved mother- & sister-in-law.

To order memorial trees or send flowers to the family in memory of Elizabeth Jean Gosse, please visit our flower store.